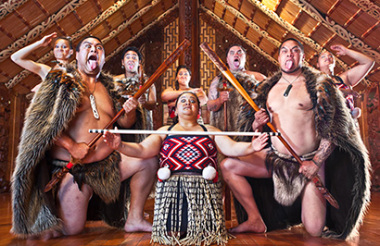 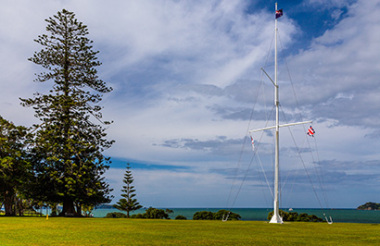 Waitangi is just 2km north of Paihia in the Bay of Islands and is arguably one of New Zealand's most historic sites. It was here in 1840 that the Treaty of Waitangi was signed between Maori and the British government. Still on the 400 hectare reserve is the Georgian style home of James Busby, a fully-carved Maori meeting house and Ngatokimatawhaorua, a 37 metre kauri waka (canoe). The latter is one of the largest ever carved and was crafted to mark the centenary of the signing of the treaty in 1940. First enjoy a guided tour where you'll learn about the history, discover the stories, personalities and events that shaped New Zealand. The guided tour takes you through the artefacts gallery, past the world's largest ceremonial war canoe to the Flagpole, the Treaty House and the carved Meeting House. After your guided tour you'll be treated to a spine tingling challenge as the cultural performance begins, this is followed by a full performance inside the carved Meeting House including waiata (singing), poi, stick games, Māori weaponry display and the famous haka.